“Where is your favorite place in the states?” People often ask us. It’s quite easy for me pick a place out of all. No, actually there are two states. They would be Utah and New Mexico! I think I pick these two because we got to spend a week or so there, which is a good amount of time for us; where as for many other states, we barely scratched the surface to know what they have to offer. Many times it was because we were being chased by snow, rain or cold weather. When we got to Utah, we were greeted by the incredibly nice and warm weather. Perhaps that’s why we like it.

Utah has been a place that I wanted to visit for a long, long time. I couldn’t wait to see the red rocks, canyons, desserts, and arches. Even thinking about it now makes me excited and would totally be down to go again. There are the five national parks in Utah and we decided to visit four of them because we only had about a week of time. We did a lot of the “must-do” and touristy things that most people would do in Utah, which I think was great for us to experience Utah as first-timers. So there would be no surprise in the activities mentioned below, but really, Utah is so cool!

It was all smiles on my face when we arrived at Zion with sunshine and 70s degrees weather. My heart was full of joy and excitement to see the canyons and red rock. Our plans were to hike the Narrows and Angels Landing Trail. And Min had something else in mind. He wanted to do the Subway Trail as well. The Subway is basically a more hard-core version of the Narrows. While you are just wading in the water in the Narrows and can get by with little to full water gears, they recommend a full dry or wet suit for the Subway because you might have to swim a little. I was not ready to swim in cold water, so we decided to go on our own separate ways.

Luckily Min was able to get a walk-in permit for the Subway (Top-Down route) even though the online system said there was no more availability. He thinks that the online reservation system is only to deter people away because in the aftermath, he only saw two other people on the entire trail. He also thinks that the rangers were totally scaring people away about the dangers in rappelling down the canyon and maneuvering through the canyons. Perhaps that is true to some extent, but I think that just means it is not a usual hike that anyone can do. There are some technical skills and gears, like a harness, you must have in order to do the Subway trail. 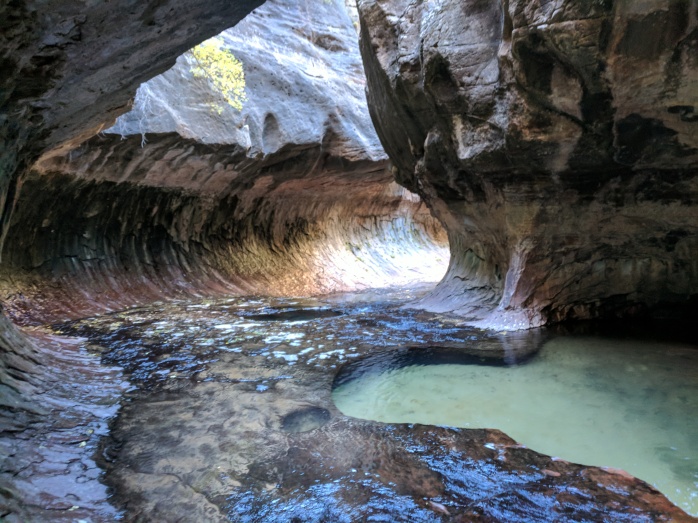 Sun beams shining on the sheer cliffs in the Narrows

The Narrows and The Subway

I rented a pair of wet socks for the Narrows, and Min rented a wet suit for the Subway. The water in the Narrows was cold but very bearable, so wet socks with sneakers and leggings were just fine. Hiking poles were great substitute for wooden sticks in the water. After dropping Min off at the trailhead for the Subway, I drove back to the park and took the shuttle to the the Narrows. I was kind of in a rush because I wanted to make sure I have enough time to get to the “Wall Street” section of the Narrows, where the narrowest part of the Virgin River is with sheer canyon cliffs on both side. You could see the incredible water marks on the canyon wall where the water stream cut through the rocks and created the canyons we have nowadays. 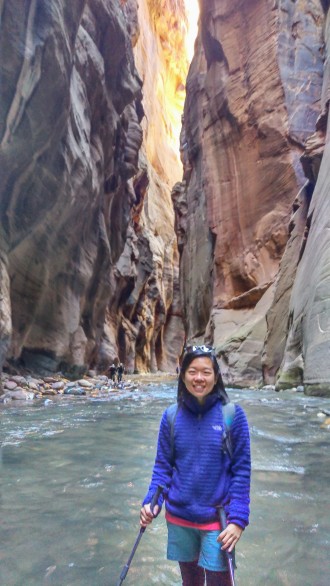 Me at the Narrows

By the time I made it back to the park, I found out that Min was already done with the Subway and caught a ride back as well. He finished so much faster than expected, so perhaps the Subway trail was really a piece of cake for him. He said the Subway was an awesome experience to explore on his own. He had a swell time. 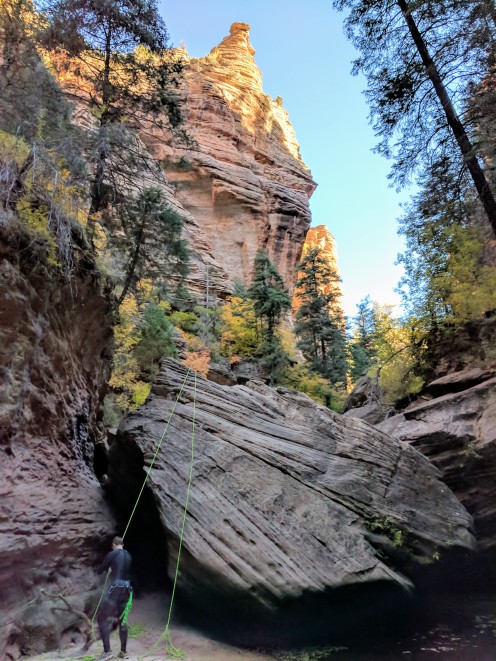 One of the easy Rappels at the Subway 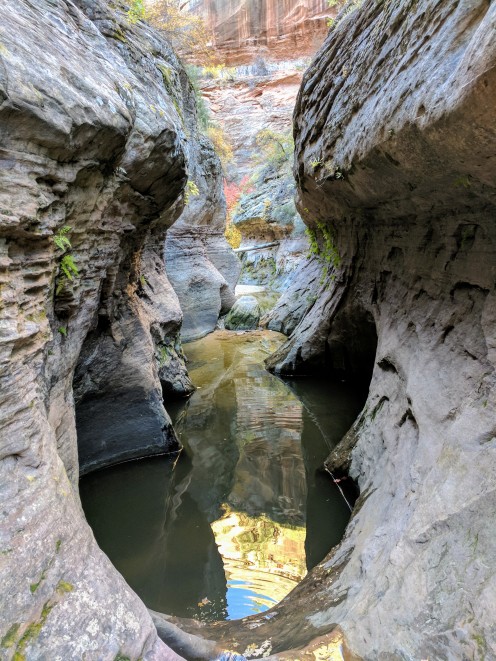 We parked next to the RV campsite to make a nice pasta dinner. They even had a sink for campers to wash dishes. How nice was that! However, there is no parking overnight at the visitor center, so we drove out to the town and came back in the morning for Angels Landing.

Honestly, if you are not afraid of heights, this trail is not bad at all! There were lots of traffic and lots of people and there is a reason for it. The view at the top was spectacular. You could see the entire Zion canyon, huge rock walls and the winding Virgin River. It was totally worth it to be with the crowd and wait for your turn to get pass the narrow ridges along the trail.

The “sketchy” part of Angels Landing

We decided to check out the Hidden Canyon Trail in the afternoon. We had to scramble some parts of the way until the trail kind of just ended at a spot where a hidden arch is. It was a little underwhelming because it does not have the usual grant ending with a view. I guess the fun part was going through the canyon and finding your way. 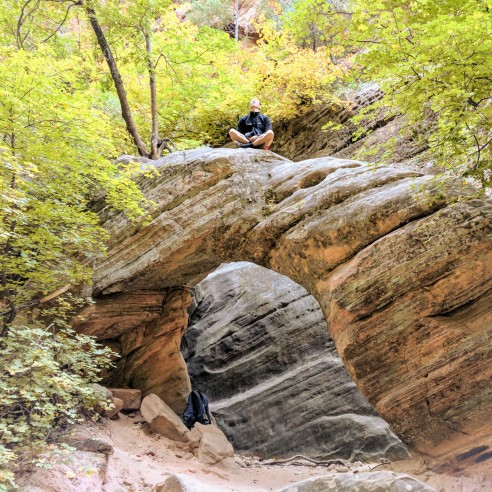 The “arch” at the end of the hidden canyon trail

We also saw some climbers on some big wall climbing in Zion and it looked so cool! There is so much to do in Zion, water trails, hiking, climbing, all in one place. Definitely coming back some day…