I’ve been wanting to finish writing up our times in Utah since the Zion one, but it is a bit harder to find time and the right mood to write now. Getting back to the real life has been good, but it also cut down much of my time in other things I used to do more – writing blog posts, going on coursera, going to the gym, hanging out with people, cafe-hopping etc. Every decision has its pros and cons, and I think it is important for me to say that I am fully embracing the whole deal that comes with working full time and that I am okay with that. I am giving myself time to adjust and to learn to like what I have right now. Ultimately, I am grateful for everything that I am blessed to have and able to have.

We only spent two and a half day at Zion, which is too short of a time, and we headed for Bryce Canyon. I was not quite ready to go to Bryce mostly because of the weather. Bryce Canyon is at a higher elevation than Zion, so it would be 10-15 F degree colder and I was just enjoying the nice and warm temperature in Zion. But nevertheless, we wanted to keep going.

Bryce Canyon is only a two-hour drive from Zion and that is the reason many people would visit these two national parks together in one trip. The visitor center at Bryce Canyon exhibited how all the nearby canyons are results of the ever-changing rock erosion over many many years, millions of year. It formed a series of staircase colored by the different color and layer of rocks and hence the nearby parks. The rocks at Bryce Canyon sits at the top, then Zion Canyon and the most bottom level of the rock is Grand Canyon. Hoodoos is the name given to the spire rock formation found in Bryce Canyon. In winter, Bryce is covered in snow and ice; when spring comes, the moisture that was trapped in the rocks thawed away. Through this process, the soft layer of rocks would chip and fall away. Over many cycles of freezing and thawing, the stronger layer of the rock is left behind standing. It’s also cool to know that Bryce Canyon is not the only place in the world with hoodoos, a few other places do also.

Not too far from the visitor center, we parked at the general store near Sunrise Point. We heated up some hot dogs in a bun with Chik-fil-a supplied ketchup and mustard. 🙂 From there, it is a short walk to the canyon rim and you can already get an expansive view of Bryce Canyon. Beautiful. Different layers of colored rock all around the canyons. White, peach, pink, orange, red. The colors must pop even more at sunrise and sunset given the names of the view points. 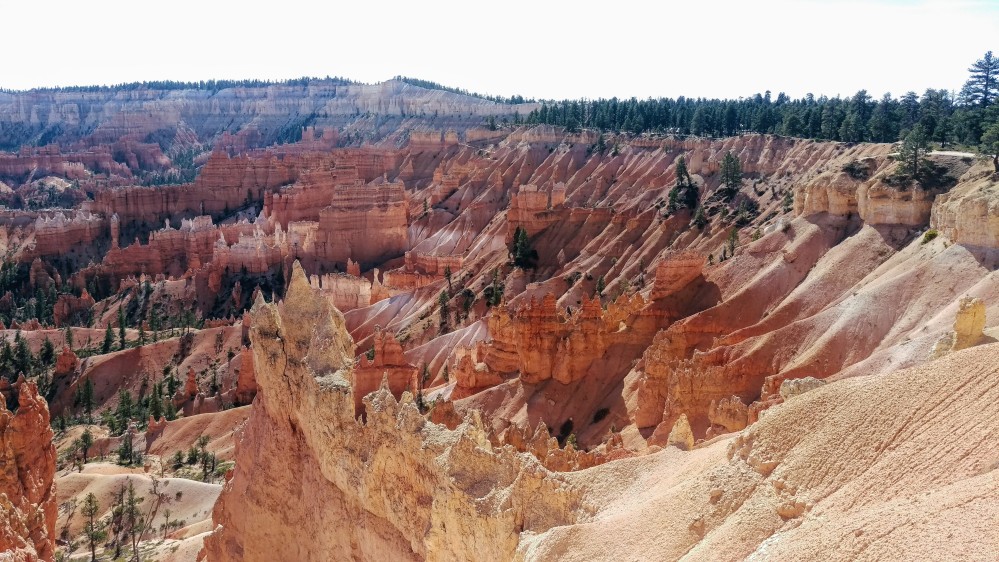 Someone standing at the rim said, “That’s it. That’s Bryce Canyon.” and then turned around and started walking away. I would understand if I had difficulties in walking, or I were in my old age; but in my opinion, just taking pictures at the canyon rim and not going down would totally wasted the visit and what could have been a greater experience.

I think the best way to experience Bryce Canyon is hiking. Unlike most of our hikes, the trails down to the canyon require you to descent first, and climb back up at the end. I am not sure if I prefer to hike in this fashion. I rather power it up in the beginning and take my time to hike down on the way back. Once we are down at the Canyon, each of the hoodoos is much bigger than it looked from the top. We spot out the “windows”, which are the yet connected rocks with a hole or space before they break into individual spires. They look like windows. We went from Sunrise Point, through Queens Garden Trail to Peekaboo Loop and ended at Sunset Point.

That’s a Window and future Hoodoo there! 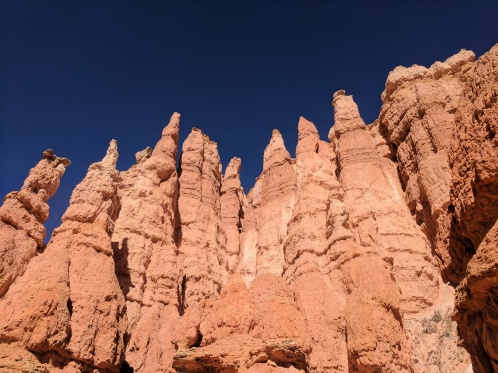 It was unexpectedly quite warm during the day. The sun was bright without a cloud in the sky. A hat and sunglasses are much needed for the hike. Also my legs and shoes were filled with sand from the trail. A shower would be so nice. Guess what! The general store has coin operated showers and even laundry! Wow! That made our day, probably our week! 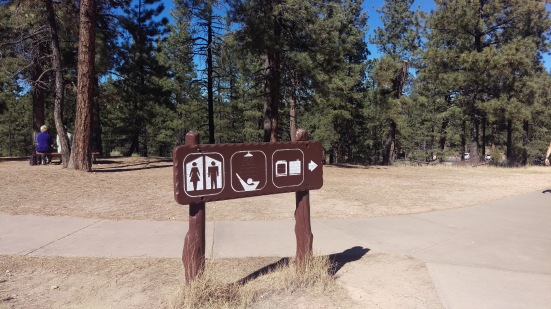 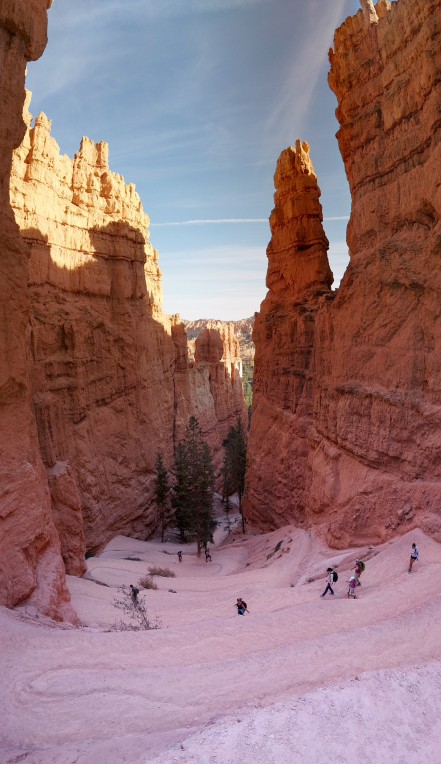 We parked at Sunset point for the night along with a few other cars. We found that many national parks leave their bathrooms open overnight, not sure if that is being generous or they just don’t lock them. But hey, that’s great for us.