I probably should document this while it is still fresh in my mind. We FINALLY went to Alabama Hills, California this past weekend. I say “finally” because our friends had been there many times and every time something would come up so we could not go with our friends. Ironically, now that they had left California for van life in Europe, we are going to Alabama Hills! Check out their awesome YouTube Channel for cool videos.

Surprisingly people do not know about Alabama Hills. People ask me if it is in Alabama. haha. No, it is in California, right at the foothill of east of Sierra Nevada. It is also very close to a little town called Lone Pine. Alabama Hills is directly east of Mount Whitney, tallest peak of the contiguous United States; therefore you get an expansive views of the jagged mountain peaks of the Sierra.

Alabama Hills have lots of rock formations and hills, and because of that it is known for a popular filming location of the old Wild West movies. For someone like me who do not know anything about the western movies; it is fascinating to know that more recent movies, like Gladiator, Iron Man and Transformers, were also filmed there. With the eroded hills and rocks, I could totally see scenes of Transformer fights being set here. We passed by the film history museum in Lone Pine, but did not have time to check it out this time.

Alabama Hills is also part of the Bureau of Land Management, which means free camping and park wherever you want. There is no facility of course, but that’s not a problem with us at all after being on the road for a few months. We arrived Friday night with our little mini camper van and picked a flat parking spot with the mountain views.

The next morning, we woke up to an awesome view and had a nice and healthy breakfast before some climbing! Most of the routes are sports climbing and documented pretty well on mountain project. This is great for us because we are only comfortable with sports climbing. The best thing was that the rocks are only steps away from where we parked the car. This place is basically lazy man’s climbing spot. 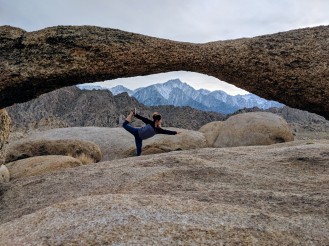 Towards the evening, we went on a short hike to Mobius Arch. We wandered around and scrambled some more rocks to take some fun jumping pictures. Then we went out to Lone Pine to get grocery for dinner. Everything is so close and accessible. Temperature cannot be any better in this time of the year. The night was neither cold nor windy. We made chili over rice, sat around the fire place and chatted until bed time. It was full moon and we could see the snow on top of the Sierra peaks being reflected under the moonlight. 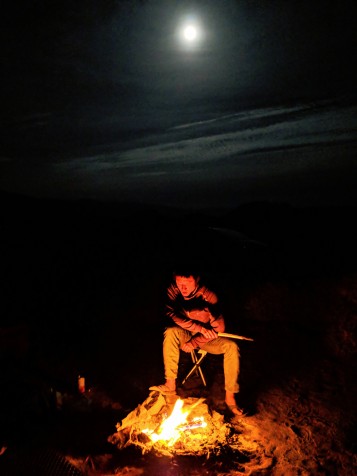 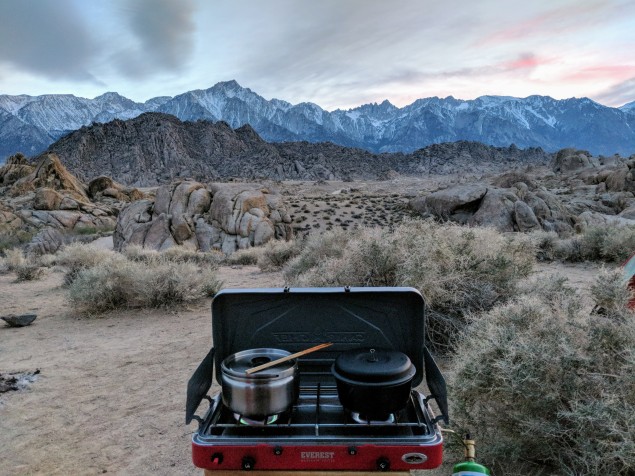 Two things I wanted to do on our last day: wake up for sunrise and climb on Shark Fin before everyone else get there. We did both! It was also Easter Sunday. While Min was still sleeping, I took a walk around the rocks and simply enjoyed the views of Sierra while spending some time reflecting on this Easter Sunday. A random tangent, I recently read The Case for Easter by Lee Strobel and it made Jesus’s death and resurrection ever more convincing to me. 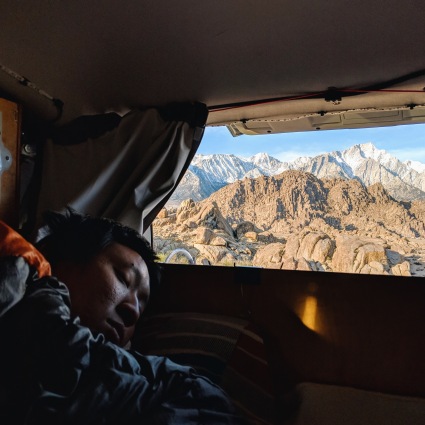 Shark Fin really does look like a shark’s fin, and it has a beautiful backdrop of Mount Whitney. The climbing pictures we took looked so cool! Though I enjoy outdoor climbing more than indoor, I scared to death on the thoughts of falling; therefore I am always on top rope no matter what. Well, this time, when it was my turn to climb, I pulled the rope to get ready and I accidentally pulled on the wrong side of the rope and the rope went up leaving the quick draws behind on the wall. What it basically meant is that either someone has to do the climb again, or I can go up and lead it. Summoned all my courage and with trembled hands and feet, I went up and led the route. I think I almost cried at one point but I did it and it is pretty thrilling! Thinking about this right now gives me sweating hands and feet… 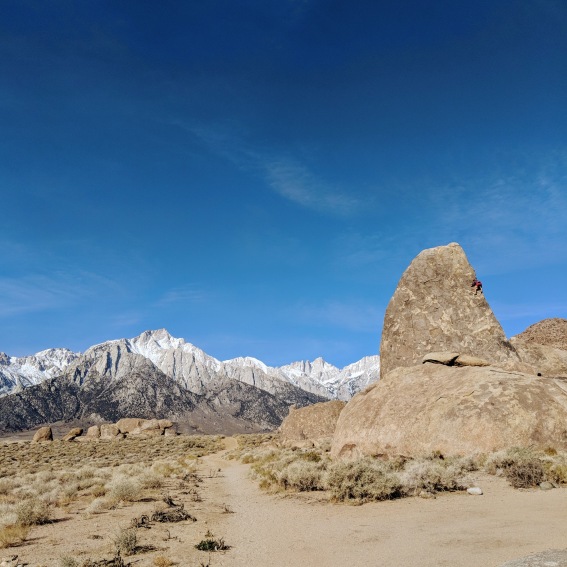 We had a big lunch in Lone Pine before starting the 7-hour drive home. Alabama Hills is a bit far, but it is so enjoyable that we all felt like we had a long and relaxing weekend. Definitely would go back there again! Until next time 🙂