I didn’t remember how scenic North Cascades National Park was until I was going through pictures of the things we did there. We hiked, we climbed, and we canoed. I still don’t know where the park starts and where it ends because it is just so big and surrounds by other national forests and recreational areas. The north end of the park also borders with some of Canada’s provincial parks. No wonder why the snowy mountain top and lakes with turquoise water reminded me so much of Canada.

We didn’t really have a plan of what we were going to do. Partly because we had been chasing by rain and colder weather since we got to Washington state, so we don’t know what we could really do. Washington lived up to its gloomy reputation very well since we got there in October. It was rainy and getting dark when we arrived at the visitor center to make dinner. Needless to say cooking in the rain was not so fun. We (more like just me) immediately ruled out the idea of backpacking in the snow and rain, and we would just play it by the ear day by day.

First time to quit on a hike

We decided to do a hike to the base of the Sahale Glacier. With all the rain from the night before, we woke up to a dreamy mountain view with fresh snow and it was cold! Winter is here… 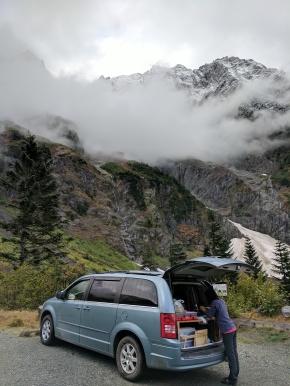 mountains, a little of everything. As we hiked up the trail, there were more and more expansive views of the surrounding peaks and I was more eager to see this glacier. Once we got out of the trees, trails started to be covered by a thin layer of snow. I thought to myself, “just a bit of snow, no problem at all.” What we did not expect was that there was more and more snow waiting ahead of us. Of course we did not have any snow gears, no waterproof shoes or pants. Our feet and pants were getting wet because the snow was becoming like one-foot deep. We also could not tell where the trail was because there were no foot prints. We were the first on the trail since it snowed last night. 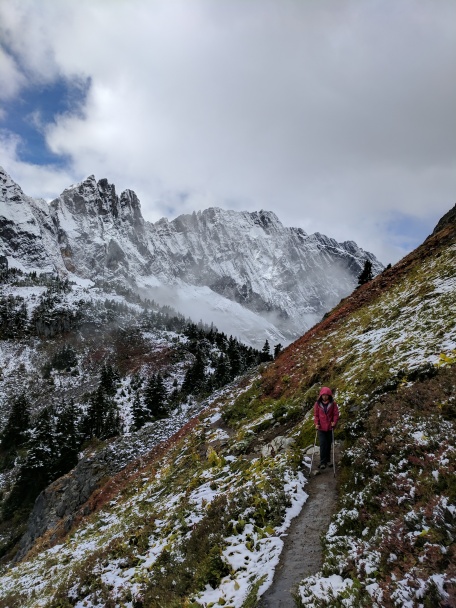 Clouds sort of cleared up and I could see the top of the glacier and also a tent! Some brave soul must had a really cold night last night. The snow did not look like it will get better in the last mile and our feet were pretty cold and wet. With only one mile left to the glacier, we made an executive decision to call it quit. Next time! On our way down, we saw some people turning around because of the snow as well. Now I don’t feel that bad. We also got to see some marmots and a bear from a distance, so that was cool.

Ramen and soup made a heart-warming dinner after the cold 🙂 It was forecasted to be quite warm the next day, and we headed to Diablo Lake and Ross Lake. The water looked turquoise in the sun! If we had more time, we would probably try kayak-camping in Ross Lake; instead, we went canoeing. We wanted to save a few dollars from calling a pick-up boat to get to the boating dock, so we took the long way to hike across the Ross Dam and some more. It was worth it.

Min said canoeing was too hard with just the two of us. For the life of us, we could not make the canoe to go from point A to point B in a straight line. We swerved and turned in all directions. This leisure activity was tiring Min out, haha, maybe I was not working hard enough.

Climbing the Prime Rib of Goat

The only thing that we knew we wanted to do at North Cascades was this multi-pitch route that is just outside of the park near a tiny town called Mazama. This is actually a really cool tiny little place. First of all, calling it a town is maybe too much for what it is. It has a grocery store that sells just about everything you need for outdoor, a ranch house, an inn, a mountain supply store and a bike shop. But what’s really cool is that it is a gathering and resting spot for the PCT through-hikers! From talking to one of the hikers, they only have about 60 more miles left to go and they had already did 2600 miles! Wow! And I just quit on my hike yesterday…

Also what was to our surprise about the North Cascades park was that there was almost no accommodation at all in the park. There was no gas station and has only one lodge and one small food mart. I guess that explained why this little grocery store in Mazama was packed at 7 am in the morning! People would get their coffee and lunch before heading into the park.

All multi-pitch is a long day, including this 11-pitch, 5.8, Prime Rib of Goat. Climb was

pretty easy. Views were alright. It was pretty fun. There was a father and son in front of us who were climbing so slowly that while we waited for them, the group of guys behind us caught up and we started talking. This happened for a few pitches that another group that was behind the guys also caught up and we all ended up double-roping and rappelling together. We all started out as separate groups but ended the climb together. Isn’t it cool? The guys even gave us free beer!

We went back to the park on our last day and hiked the Maple Pass Loop. It was rated as #2 on AllTrails, so we thought why not. It was a fairly easy and pretty hike, the most leisure thing we did out of the four days in North Cascades! Without much said, here are some pictures that talk about itself. (I am feeling lazy to write more…)

I would say though, spending 4 days in North Cascades was too short to fully experience what this place has to offer. We didn’t even touch the southern part of the park. Next time! (I think I said this a lot throughout the whole trip) We were in a hurry to get to Vancouver for asian food.